This sermon is the third in our series on Job – Weathering the Storm. First – lets recap a bit. Do any of you remember the scene in Job chapter one and two? The action is fast, furious, and unrelenting:

Place yourself for a moment in Job’s shoes. Who in the world can weather that kind of a storm?

To add insult to multiple injuries, the three friends show up – Eliphaz, Bildad, and Zophar, and after sitting shiva with him for 7 days and nights, they proceed to do a little Bible thumping. Anyone heard that expression before? It has been described as the act of aggressively and relentlessly promoting your understanding of Christian faith and practice to convince someone to believe and think the way you do on the matter. Listen to how one friend warms up for his version of Bible thumping: “If you were truly wise, would you sound so much like a windbag, belching hot air … I’ve a thing or two to tell you, so listen up! I’m letting you in on my views …” (Eliphaz in Job 15, the Msg) After all this windy, judgmental, and unhelpful talk from Job’s friends, it is Job’s turn to respond, and what comes out of his mouth might surprise you.

God has surely worn me out … his anger tears me and afflicts me; he slashes at me with his teeth … I was at rest, but he shattered me, seized me by the back of the neck, dashed me into pieces; he raised me up for his target. His archers surround me; he cuts my kidneys open without pity and doesn’t care, pours my gall on the ground, burst me open over and over, runs against me like a strong man. I’ve sewed rough cloth over my skin and buried my dignity in the dust. My face is red from crying, and dark gloom hangs on my eyelids. But there is no violence in my hands, and my prayer is pure. (Job 16)

Harsh words. Lets put aside for a moment the notion of Job’s incredible “patience.” Lets talk about how angry he was. How frustrated. How anguished. How much in pain he was. Words cannot describe the depths of his anguish, but he gave it a good try … and when the words came, WOW … they came, pouring forth in waves of utter agony. 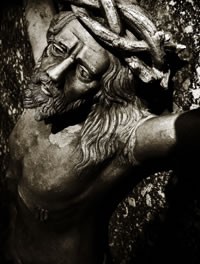 Ever thought about praying like this before? This is an example of one type of prayer taken straight from Scripture. And if you are ever afraid to pray like Job, might you consider praying like Jesus? Yes, Jesus taught his disciples the “Our Father” prayer in Matthew, but he also taught us to pray in the way he lived and died. Listen to how Jesus prays in the moments before he takes his last breath – with raw emotion from the depths of his suffering: “From noon until three in the afternoon the whole earth was dark. 46 At about three Jesus cried out with a loud shout, “Eli, Eli, lama sabachthani,” which means, “My God, my God, why have you left me?” (Matthew 27:45-46 – Jesus’ words were the first line of Psalm 22, one of many psalms of lament in the Bible’s prayer book)

One thing we all need to learn from Job and from Jesus is that we need our prayers to get more honest. Fortunately, we have a long tradition of prayers that are offered up in the midst of suffering, trial, and despair. They are called prayers of lament. You can find them in the book of Lamentations and in the Psalms. They are prayers that express a cry of need in a context of crisis. They are prayers that appeal for divine help in moments of great distress. They are raw. They are real. They are honest. If you want a real relationship with someone, it has to be a relationship based on authenticity, honesty, and love. Should that be any less true of our relationship with God? Job, among other things, wants to teach the church how to lament again.

The best way to learn how to lament is to just do it, so lets give it a try. Some can’t bring themselves to say the words they feel. That is OK. When in doubt, just start by praying Scripture. Let saints and sinners who have gone before us give voice to the things we fear to name:

How long will you forget me, Lord? Forever?
How long will you hide your face from me?
2 How long will I be left to my own wits,
agony filling my heart? Daily?
How long will my enemy keep defeating me?
3 Look at me!
Answer me, Lord my God! Restore sight to my eyes!
Otherwise, I’ll sleep the sleep of death,
4 and my enemy will say, “I won!”
My foes will rejoice over my downfall.
5 But I have trusted in your faithful love.
My heart will rejoice in your salvation.
6 Yes, I will sing to the Lord
because he has been good to me. (Psalm 13)

There you have it. A Prayer? Yes. Heresy? No. Harsh words? Absolutely. Biblical words? Certainly. But notice something else about most lament prayers. They start with where we are in the midst of suffering, but they almost always begin to turn just a little near the end. They begin to point us toward something better … something beyond … something on the other side of our pain and despair. That something has a name in our Christian faith. It is called HOPE. 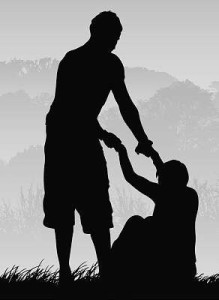 Dr. Kavin Rowe at Duke Divinity School has written and taught on the subject of resiliency. In a recent post, he recalls experiencing the song “Tubthumping” by Chumbawamba on a trip to Europe. The song, which went on to become an international hit, had one simple phrase that everyone seemed to know. The refrain keeps people all over the world coming back for more: “I get knocked down, but I get up again; you’re never going to keep me down! … Getting knocked down is as basic as being human — life just does this to us — and so is the desire to get back up. The legend of the phoenix, for example, is a story about resilience: when the phoenix dies, it is reborn out of its own ashes. All human beings are knocked down, and all long to get back up.”

Resiliency is the ability to get back up again … and again … and again … and again. Again, as Kavin puts it: “Resilience isn’t, however, the typical quality we ascribe to leaders. We think instead of charisma, intellectual prowess, rhetorical skill, political savvy, financial success or something along these lines. Christ shaped leadership is resilient leadership … and it is grounded hope in God’s permanent faithfulness. It is not inner strength or self-confidence.” NO. When we get knocked down, even to the point of death … we still hope in the one who conquered sin, death, and the grave. Resilience is not toughness … is the response of hope. Kill hope and resilience will die with it. Kavin goes on to suggest three recalibrations that are needed to help cultivate resiliency among Christian leaders and followers of Jesus Christ:

Kavin’s insights go a long way towards grounding believers in what I might call the Christian “get-back-upedness” of our faith. We get back up again as followers of Jesus, not because of our resolve or strength, but because of our hope and trust in God’s faithfulness, even when we are surrounded by evidence to the contrary.

One song I have used over the past 20 years of my volunteer work in jails and prisons is an old Gospel song titled Victory is Mine. I close with it today, but share it with you because of where I have experienced this song’s power the most – in prison. In other words, in circumstances that have a lot of evidence contrary to hopefulness. Every time I sing the refrain, I imagine the many inmates who have become friends and brothers in Christ. I have witnessed how this song and our worship together creates a space for hope to endure in the midst of alienation, self-doubt, unanswered calls from family and friends, and fear about never being physically free again in this life. Even when one is surrounded by nothing but concrete walls, electronic doors, and nothing but time that could be used to wallow in self-pity, space can be created for Christian hope to flicker, burn, and shine in the darkness.

I told satan, get thee behind,

Victory today is mine.

I told satan, get thee behind,

Hope today is mine.